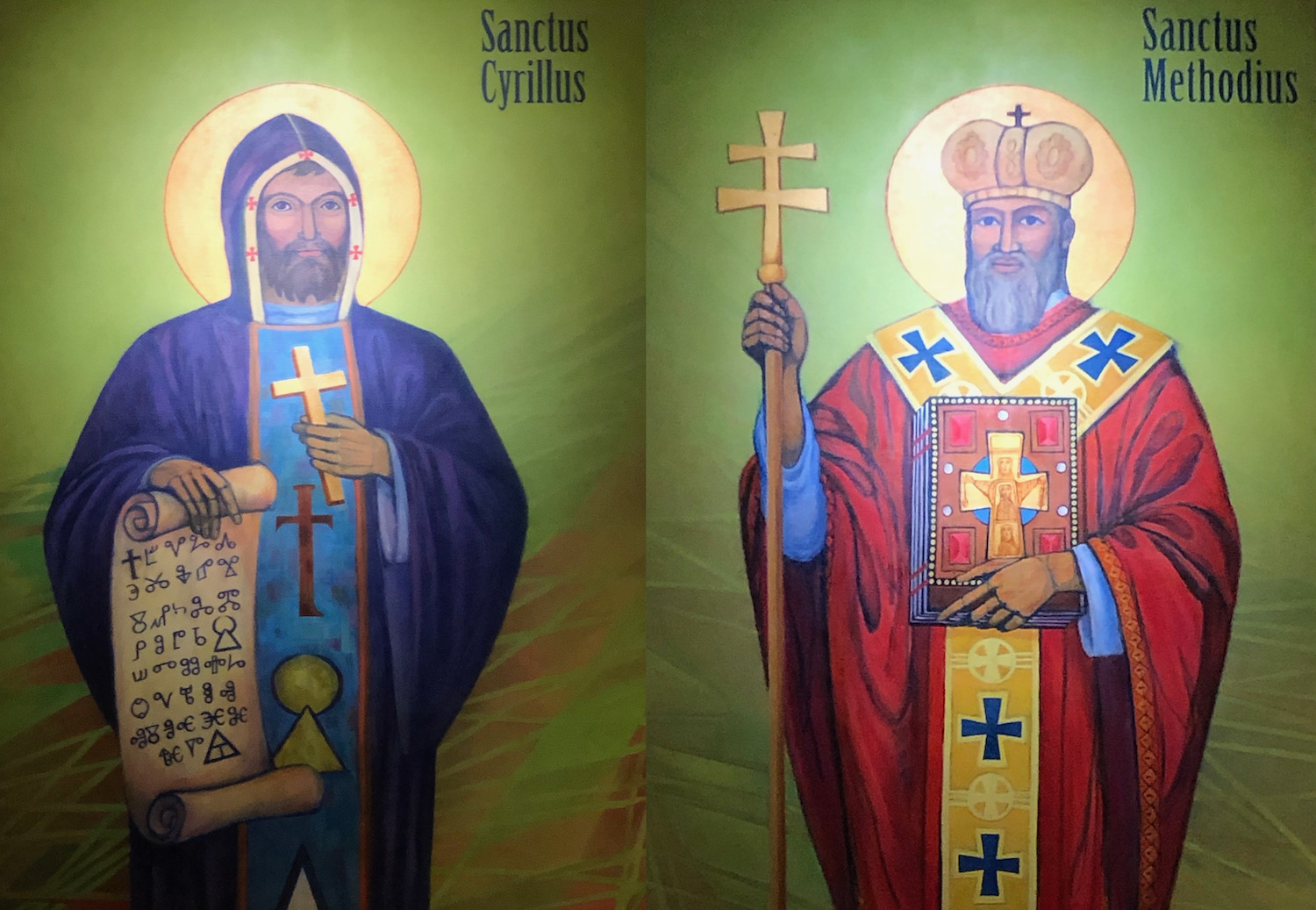 Valentine’s Day is not just a day of wonder and joy for lovers and florists. February 14th is also the Feast Day of two Greek saints from Thessaloniki, the missionaries, linguists and diplomats Cyril and Methodius. [1] In 863, more than 1155 years ago, these Apostles to the Slavs set out on a journey, armed with an invention that would prove to be one of Christianity’s richest and most civilizing contributions to European culture: an alphabet.

In the preceding centuries, tribes of Slavs had been migrating around south eastern Europe. In those border territories of Byzantium both the Greek and Slavonic languages were in common use. But the Slav peoples had no alphabet or literary culture of their own. By the middle of the ninth century Prince Rastislav was the ruler of Great Moravia, in what is now the Czech Republic and Slovakia. Keen to build up the Great Moravian Church and to resist the control of the Frankish bishops and clergy, who looked upon Moravia as territory that properly belonged to their jurisdiction, Prince Rastislav wrote to the Byzantine Emperor, Michael III, asking him to send teachers who could lay before his people the truth of the Christian faith in their own language. Cyril and Methodius were chosen. They invented an alphabet, so that they could translate the Scriptures and the Liturgy into Slavonic.

When we think of the impact of the Christian religion on the culture of Europe, we might perhaps think of the vital influence of remote monasteries that, as Sir Kenneth Clark famously claimed, enabled civilization to survive by the skin of its teeth during the dark ages. Or perhaps our minds would turn to the building of the great cathedrals of Europe or the gorgeous sacred art of the renaissance. Some might even think of the famous icons of Orthodox Russia, the sublime unity of the figures of Andrei Rublev’s Old Testament Trinity or the unutterable tenderness of the Vladimir Mother of God, cheek to cheek with her divine child. But we might wonder how many of us, when reading Tolstoy or Dostoevsky or Chekhov, would remember that the very Cyrillic letters those great literary giants wrote down on their paper are the Christian Church’s gift to the Slav peoples and the world?

The Life of St Cyril relates that when Emperor Michael asked Cyril and Methodius to make that missionary journey to Moravia the letters of the Slavonic alphabet were revealed to them in answer to prayer. They set out on their mission and took with them a letter from Michael to Prince Rastislav, saying of their alphabet, ‘Receive this gift, which is more precious and greater than all silver and gold and precious stones and all magnificent wealth’. Surely here is a set of hagiographical superlatives that can be regarded as no exaggeration.

The mission of Cyril and Methodius was not welcomed by the Frankish Archbishops of Salzburg and Passau, who did not take kindly to the idea of the Greek brothers disturbing, with their new-fangled Slav alphabet, the ecclesiastical life what they considered to be their own territory and jurisdiction. They held that God was properly to be worshipped in just three languages, Hebrew, Greek and Latin, after Pilate’s superscription on the Cross. Fortunately for Cyril and Methodius, for the Slav peoples then and ever since, and for the culture and civilization of Europe and the world, Pope Adrian II disagreed with them. The heresy of trilingualism was condemned. The Pope blessed the Slavonic books, which were laid upon the altar of the Basilica of St Mary Major and Cyril and Methodius celebrated the liturgy in Slavonic in the Church of St Peter and in other Roman churches. It was in Rome that St Cyril died. He is buried in the Basilica of San Clemente, one of the most beautiful churches in the city. Meanwhile, Methodius was named Archbishop of Pannonia and returned to his mission among the Slavs.

From those days, before the Great Schism that was to divide the Church, East from West, Cyril and Methodius stand as true paradigms of European Christian culture. They were people who were able to step beyond their own Byzantine cultural idiom to embrace and transform beyond all imagining another culture, that of the Slavs. The sheer brilliance of their learning, the depth of their faith and the geographical scope of their missionary activity and of their heritage is what led John Paul II in 1985 to name Cyril and Methodius co-patrons of Europe, along with St Benedict.

It is also extraordinary to think that more than 1155 years ago these two saints so readily grasped what seems to us a very contemporary truth: the need for people to teach and hand on the faith in a comprehensible language. As Pope Benedict comments, ‘Cyril and Methodius are in fact a classic example of what today is meant by the term “inculturation”: every culture must integrate the message revealed into its own culture and express its saving truth in its own language.’ To this day, Old Church Slavonic is the liturgical language of all the Slav Churches of Eastern Europe. And the peoples of Slovakia, the Czech Republic, Bulgaria, Croatia, Serbia, Ukraine, Russia and the other Slav nations all regard the two brothers from Thessaloniki as the fathers of their literary culture. [3]

[1] The last general revision of the General Roman Calendar from 1969 celebrates February 14th as a “Memorial of Saints Cyril, monk, and Methodius, bishop.” In Europe, this day is celebrated as a Feast.

[2] The Castle of Nitra is located on top of a hill where an old, Slavonic fortified settlement once stood. The first written reference to the settlement dates back to the times of the mission of SS. Cyril and Methodius (871) and it mentions a consecration of the ruler’s church in 828. In 880 the city became the center of the newly founded Nitra Bishopric. The city of Nitra hosts an annual Slovak national pilgrimage on July 5th to honor SS. Cyril and Methodius.